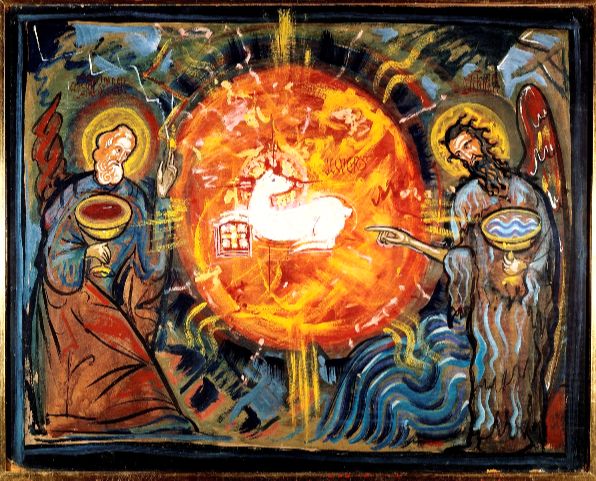 Nourished by this saving Bread, and given life by this eternal Chalice, let us unceasingly render thanks to Christ, forever present in his Church.  He has come to us in his sacraments and will come in glory to judge the world; He Who is co-eternal with the Father and the Spirit of life.

- from the Divine Liturgy according to St Germanus

They are none other than the Body and Blood of Jesus Christ.

At the heart of the Christian life is the Holy Eucharist, in which Christians gather to take part in the celebration of the great Mystery of the saving work of Christ, and be fed with his Body and Blood.

The death of Jesus Christ on the Cross was not just an execution but it was also a sacrifice.  Centuries earlier, when the people of Israel - the Old Testament Church - were freed from captivity and slavery in Egypt at the Exodus, the Passover lambs - the firstborn lambs - were sacrificed, the people of God were saved from death by their blood, which was smeared on the wood of the doorposts (Exodus 12: 1-14), and the faithful people ate the sacrificial lamb.  So Jesus Christ is the new Passover Lamb, Who is sacrificed and whose blood, shed on the wood of the Cross, brings freedom and salvation from death to the New Israel - to all who are united to Him in the life of the Church, and whose union is sealed by consuming the Sacrifice.

At every celebration of the Divine Liturgy, this Sacrifice is once again made present.  We enter into the state where time has no meaning, and where, by fulfilling the command of the Saviour to "do this", we take part in that same, eternal Sacrifice, in which Christ is both the Priest (the one who offers the sacrifice) and the Victim (the living one that is offered in sacrifice).  The priest calls upon the Father, asking Him to send down the Holy Spirit, Who sanctifies and consecrates the people's offerings of bread and wine, transforming them into the real and true Body and Blood of Jesus Christ. 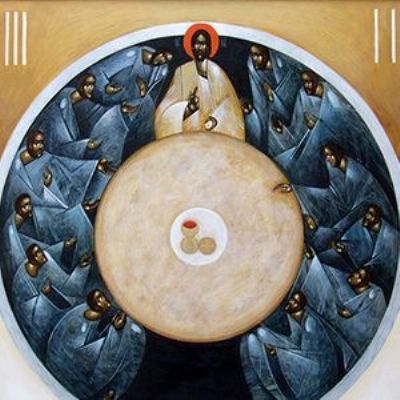 However, it is not just the sacrificial death of the Saviour that is made present, but rather the entire saving work of God for humankind in creation: his suffering, death, burial, Resurrection, and Ascension to heaven.  The Saviour gave us this command when He said, 'Do this in memory of Me'.  Memory in English is a poor translation of the original Greek anamnesis, which refers to a making present of things outside of the present, a bringing of the eternal into the here and now.

Thus, what we receive is not the dead, lifeless corpse of a man from two thousand years ago, but rather the sacrificed, risen, ascended, and glorified Body and Blood of the God-man, Jesus Christ, which are alive and which give life to all who receive Them within their own bodies as part of their ongoing growth into the life of God through the sacramental life of the Church.

‘Very truly, I tell you, unless you eat the flesh of the Son of Man and drink his blood, you have no life in you. Those who eat my flesh and drink my blood have eternal life, and I will raise them up on the last day; for my flesh is true food and my blood is true drink. Those who eat my flesh and drink my blood abide in me, and I in them. Just as the living Father sent me, and I live because of the Father, so whoever eats me will live because of me. This is the bread that came down from heaven, not like that which your ancestors ate, and they died. But the one who eats this bread will live for ever.’

So Orthodox Christians come together with hungry bodies and souls, to celebrate the Great Mystery of our salvation, and to be fed by God with his Body and Blood, so that we might grow ever further and ever deeper into union with Him, as we take part in the eternal Wedding-Feast of the Lamb in the Kingdom of God.

Come, holy people,
take the Body of your Lord;
drink of his chalice,
take the Blood for you outpoured.

Saved by his Body
hallowed by his Blood, we raise
with grateful voices
to our God our hymns of praise.

In this great Myst'ry
of his Body and his Blood,
from fiery torments
we are rescued by our God.

He, our Salvation,
He, the Christ, the Son of God,
gained our redemption
by his Cross and precious Blood.

Slain for all people,
He the Lord prepared this Feast;
the holy Victim
offered by Himself as Priest.

Victims were offered
by the ancient law of old;
this sacred Myst'ry
types and shadows thus foretold.

He, the Light-Giver,
Saviour of the human race,
grants to his holy
servants his abundant grace.

All who with pure hearts
in the Saviour's word believe,
come and, partaking,
saving grace from Him receive.

His holy people
know Him as their Guardian Lord;
now to the faithful
life eternal He affords.

The Bread of heaven
makes his hungry people whole;
this living Fountain
vivifies the thirsty soul.

He, the Anointed,
Alpha and Omega – He
will come in glory
as our Judge eternally.

Some points to bear in mind:

'Thus He washes us daily from our sins in his Blood, when the commemoration of his blessed Passion is renewed at the altar, when the creature of bread and wine is changed into the Sacrament of his Flesh and Blood by the ineffable operation of the Spirit.'

'For we do not receive these things as common bread nor common drink; but in like manner as Jesus Christ our Saviour, having been incarnate by God’s Logos took both flesh and blood for our salvation, so also we have been taught that the food "eucharistised" through the word of prayer that is from Him, from which our blood and flesh are nourished by transformation, is the Flesh and Blood of that Jesus Who became incarnate.'

'For when the Lord says, "Unless you have eaten the flesh of the Son of Man, and drunk His blood, you will not have life in you", you ought so to be partakers at the Holy Table, as to have no doubt whatever concerning the reality of Christ’s Body and Blood.'

'For as the bread, which is produced from the earth, when it receives the invocation of God, is no longer common bread, but the Eucharist, consisting of two realities, earthly and heavenly; so also our bodies, when they receive the Eucharist, are no longer corruptible, having the hope of the resurrection to eternity.'